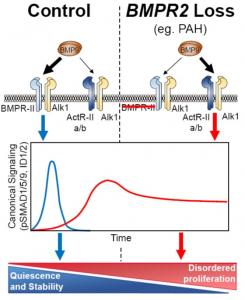 MO:  Our ATVB paper was largely the product of Anne Theilmann’s efforts, with support from Dr. Lindsey Hawke and Rhiannon Hilton (PhD Candidate, Experimental Medicine) in the Ormiston Lab, among others. Anne was an MSc student in Experimental Medicine from 2017-2019 and is currently in her 2nd year of Medical School at UBC. In addition to BMP signaling, Anne enjoys Marvel movies, figure skating and coffee. This work wouldn’t have been possible without support from our colleagues at Queen’s, Drs. Don Maurice, Paula James and Stephen Archer.

• BMP9-induced proliferation with BMPR2 loss is linked to the prolonged induction of the canonical BMP target ID1.

• A >50% reduction in BMPR2 is required to shift the BMP9 response toward excessive proliferation.

• In vivo administration of recombinant BMP9 causes endothelial overgrowth in the retinas and lungs of endothelial-conditional Bmpr2 knockout mice.

Read the paper in ATVB!