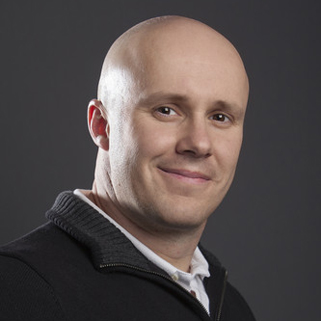 Education:
B.Sc. (Hons.) in Biochemistry (1996) - The University of Western Ontario

A primary goal of the research in my lab is to understand the mechanisms of action of biomolecules, and, where possible, to rationally alter or re-purpose their functions in useful ways. To do this, we use X-ray crystallography, high-resolution microscopy, and a number of other biophysical tools to gain detailed descriptions of these molecules in solution and inside cells. Our most intensive areas of focus in recent years has been on: (1) kinesin motor proteins, which form a large superfamily of cytoskeletal motors that are essential for cellular cargo transport, cell division, and cell shape changes; and (2) on natural toxins that possess anti-fungal and anti-tumor properties. The activities these molecules possess have direct relevance for biomedicine. They also provide frameworks for understanding the fundamental underpinnings of biomolecule design.

My laboratory studies molecular motors and cytoskeletal proteins that generate pushing and pulling forces required for chromosome segregation, cell morphogenesis, and motility.  These proteins are structurally dynamic. They can associate into complex and beautiful molecular assemblies that are in a constant state of flux in cells.  To gain a complete view of the structure-function relationships of these proteins, we use state-of-the-art X-ray crystallographic, electron and fluorescence microscopic, and protein kinetics measurement instruments, as well as molecular genetics and cell biological approaches.

Invasive fungal infections pose a serious threat to human health, particularly for newborn children, immunocompromised individuals and hospitalized patients. Approximately 70–90% of all invasive fungal infections involve Candida fungi. Among these, Candida albicans is the predominant species, with infections involving Candida glabrata becoming more common. In spite of the advances achieved in the diagnosis and treatment of these pathogens, Candida bloodstream infections are associated with a mortality rate of approximately 40%, and millions of otherwise healthy individuals still suffer with serious cutaneous or mucosal Candida infections. These factors place vital importance on learning as much as possible about how these microbes colonize and proliferate in susceptible individuals, and how to target such events with drugs that are safe for patients. Our research has shown that a family of motor proteins, named ‘kinesins’, are required for Candida albicans cells to divide and transition into growth forms that promote host colonization and proliferation. We have also gained information on how some Candida-specific kinesins move and generate forces to drive these biological processes. In the coming years, we will establish fundamental knowledge about the structures, functions, and mechanisms of action of Candida kinesins that have not yet been studied in order to provide a complete picture of the systems that cooperate to organize the internal components of fungal cells during growth and pathogenesis. We have also begun drug-screening assays to look for agents that inhibit relevant kinesin motor functions in these microbes in order to facilitate the development of new therapeutic approaches for treating or preventing Candida infections.

Understanding and targeting actin cytoskeleton-driven cell motility and molecular pathologies
The actin cytoskeleton is the key cellular machinery responsible for the morphological changes in cancer cells that facilitate their ability to metastasize. Actin recruitment and specific actin gene mutations are also involved in the pathogenic mechanisms of many infectious microbes and several cardiovascular diseases and conditions, respectively. Our research on actin-targeting natural products that potently alter actin cytoskeleton dynamics has identified the key bioactive components of these molecules that can be used to guide development of new chemotherapeutic agents to defeat the contribution of actin to the spread of cancer, infections, or other actin-dependent conditions. However, in order to kill malignancy-causing cells exclusively, drugs derived from these natural compounds must be re-engineered in ways that confer cell specificity. This demands an understanding of the common ways in which different forms of these molecules function, and which of their structural features determines their potency. In order to gain such information, we have assembled a collaborative research group to examine the interactions formed between these compounds and their protein targets at an atomic level, and to synthesize potent and cell-specific natural product analogs that structurally and functionally mimic the natural molecules in ways that could slow or prevent disease progression.

We have a strong interest in the emerging disciple of synthetic biology, which uses defined pieces of genetic information as building blocks to create biological machines with functions that may be radically different from those found in nature. Through collaborations with other labs at Queen's, and at other universities, we employ protein engineering concepts to understand structure-function relationships for numerous classes of proteins beyond the subjects of motors and cytoskeletal proteins. As the lead advisory group for Queen’s Genetically Engineered Machine Team (QGEM), we also foster opportunities for junior scientists and undergrads to gain expertise in protein engineering and synthetic biology, as well as cell biology techniques, molecular genetics, chemical biology, and advanced techniques for investigating protein structure.

SUMMER STUDENTS (Past and Present)